This thread is for updates and discussions about the upcoming Scala 2.13.8 release.

2.13.7 contained 6+ months of accumulated changes, so it’s not surprising that a few regressions have turned up, most notably:

But also some other issues; see the PRs on the 2.13.8 milestone for details:

So we propose to publish a 2.13.8 release candidate by December 17, followed by a final 2.13.8 release no earlier than January 5. (Depending on how things go these dates might have to change, but even if they do, we’ll be sure not to intrude on the holidays.)

If you’re aware of anything you think ought to be considered a blocker for this release, please let us know, either by commenting on the appropriate ticket or PR, or by replying on this thread.

We hope we have now merged the last 2.13.8 PR. The corresponding nightly build is 2.13.8-bin-b59fa66 . The community build is currently validating it.

This time window is way too short to introduce regressions to the code base.

Maybe in the next cycle, you could announce a date for “regression freeze”, after which no new regressions will be permitted.

There is the PR about supplementary char support that just missed the previous cut-off, which was beaten by the previous PR about supplementary char support. It was so long ago, I don’t recall the details, but I do remember that it was when I learned about the cyclone operator. It closes four tickets not opened by me. Probably I had already exhausted Martijn’s good will in reviews.

Scala 3 is also not staffed for code review of low-priority contributions. That PR that was merged predicated on “seems clear the Scala 3 forward port will land”, it hasn’t yet.

It would indeed be really sad if this was not included, because the PR looks really good and I just wanted to confirm that all the different reports it closes are actually covered

The supplementary char PR has a bright future, I believe.

Update on 2.13.8 progress: the community build found a collections regression. We have reverted the PR in question and will re-run the community build tonight. (We weren’t able to run it last night due to some trouble with our Jenkins, which Lukas has since resolved.)

The community build is green again.

Unless problems turn up, we intend to re-release this as 2.13.8 no sooner than January 5.

semanticdb looks to be working perfectly with the RC

We’re pushing the target rebuild date out to Monday, January 10, though. So if the holiday break prevented you from doing any testing, yet, well: here’s your chance!

FYI, I am now on sick leave because of covid. Nothing to worry about but I’m very tired. I will do my best to release Scala.js ASAP for 2.13.8, but there might be a longer delay than usual.

Sympathies, and take care of yourself!

2.13.8 JARs are on Maven Central. Please publish your downstream projects, compiler plugins, tooling updates, and so forth, now!

We will announce once:

New scalameta release with semanticdb support for Scala 2.13.8 is out: 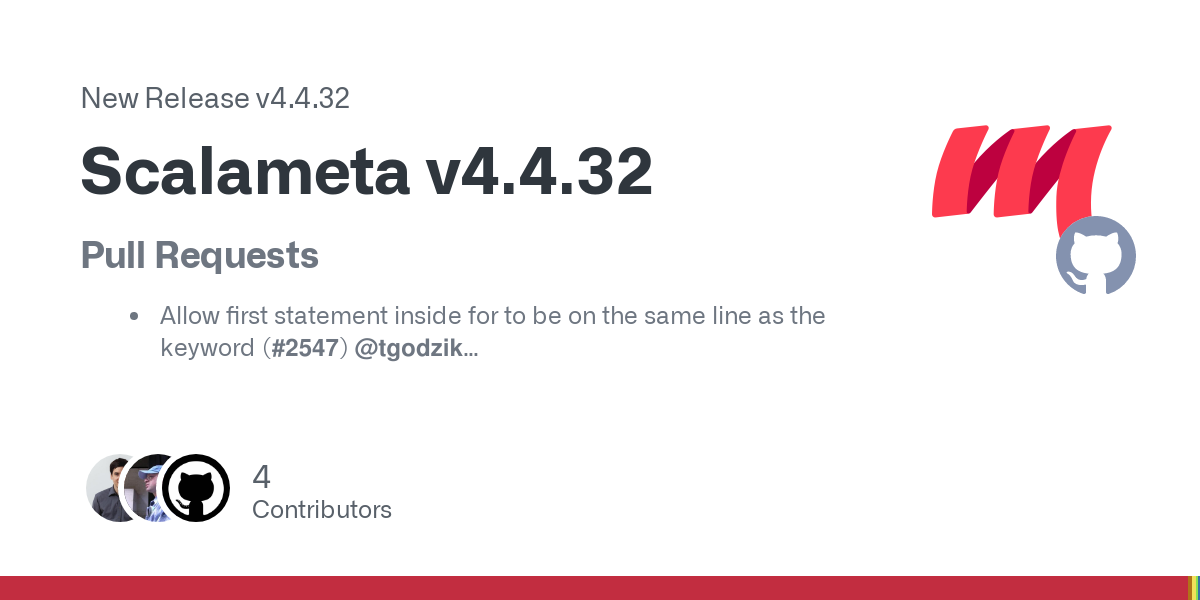 Pull Requests Allow first statement inside for to be on the same line as the keyword (#2547) @tgodzik Add support for Scala 2.13.8 (#2519) @tgodzik Show correct error when secondary constructor ha...

Working on Metals, but might take a bit, we haven’t managed to release the improvement that would allow us to release only for a specific version.

kind-projector and scoverage have published. I think only Metals is left?

We already have the support for 2.13.7 in the recent SNAPSHOT. We are working on the full release now, but there was a couple of things we needed to fix beforehand. We should be able to finalize it tomorrow.

And I’ve added “ask Scalafix to publish” to the release steps for next time.

I’ve also added steps for silencer, wartremover, and Ammonite, though I think they are not blockers.

@sjrd @romanowski You agree that we’re good to go once Metals releases…?