Could we do a followup pattern-match to compliment this? I like the start, but it’s not really doing anything that leverages “Features” or the specific implementations.

Hey swoogles,
Thank you for the feedback, how about the code below ?
By the way, code works on Linux and MacOs, but it does not work on Scala Fiddle and i did not test it on windows.

This is my contribution. It includes pattern matching, named arguments, default values, a basic ADT with case class and case object, high order functions and finally some operations on a collection.

Thanks a lot for everybody participating. I’m going to let this going until the 25th of September. Then we can do a poll to decide the winner(s).

By the way, code works on Linux and MacOs, but it does not work on Scala Fiddle and i did not test it on windows.

Actually, it doesn’t work correctly on either Scalafiddle or Scastie – this is designed specifically for printing on the console, not embedded in the browser, which is the point of this particular challenge…

Actually, it doesn’t work correctly on either Scalafiddle or Scastie – this is designed specifically for printing on the console, not embedded in the browser, which is the point of this particular challenge…

I just added support for colors in the console: https://scastie.scala-lang.org/wtrbSmugRyaEHfZ0uQ40gQ

Something similar, but hey, I gotta try:

@MasseGuillaume wow that was really quick (that’s what she said), thank you for the effort.

@jducoeur i’ll open an enhancement issue to support the CLI ANSI colors on the Scala Fiddle Github page, and Hopefully we’ll have that feature pretty soon.

Use ASCII art naming instead?

Maybe such fancy looper for parallel computing? Futures with a kind of recurrence? (I’m aware more than 18 lines)

I think that the best solution is a carousel of snippets demonstrating different features of the language. See @nafg’s post above for examples.

This way readers with no background in certain field, will always find something new for them and even those who already know what all the buzz-words are about will be able to compare Scala syntax with the other languages.

I think the code snippet should be simple and don’t need to show too many features in Scala.
I find some good code examples in old Scala home page.

Some code snippets (came from here and there and modified) I like:

The third one looks good, but I still think it is a bit complex. I try to use if/else instead of pattern match (Nil is odd for beginners) but still like the latter.

For reference, it looks like this on windows: http://prntscr.com/go4bpg

I’m going to chip in and say that the front page snippet should not be to show off language features.

The goal should be two things:

These concerns are contradictory, but neither of them involves showing off how many features the language has. It’s not an uncommon feeling that the number of features Scala has is a disadvantage of using the language!

Ideally the snippet would show no features a newbie would not immediately understand. Abstract types, multiple-inheritance/trait-stacking, context bounds, implicits, and many other things can wait for later. The example can use them just fine, but they should not be necessary for understanding what the example is doing.

That said, I’m going to throw my hat in the ring and offer the Scala.js Oscilloscope:

18 lines of non-whitespace code, uses a lot of basic language features (Seqs, anonymous functions, tuples, destructuring, for-loops) and puts together something pretty in relatively few lines of code. A user can tweak this and get immediate feedback, e.g. changing the functions used to draw the graph or changing the colors used. And anyone can appreciate the output, not just people interested in a particular algorithm or technique.

I’m also going to vote for using ScalaFiddle instead of Scastie, even though that was not the original question. Apart from ScalaFiddle compiling code way faster than Scastie, Scastie also takes forever (almost 10 seconds!) to load over here in Singapore: 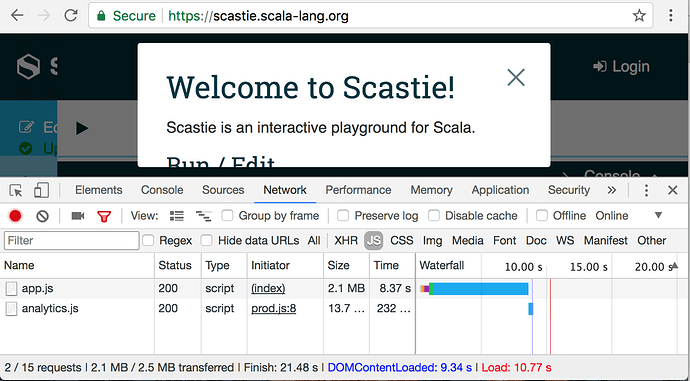 It appears the fault is split between lack of full optimizations on the JS blob, as well as lack of gzip compression on the server. Apart from initial download speed, ScalaFiddle does a bunch of things Scastie doesn’t, e.g. caching compilation output using a CDN for instant initial page loads that include running the compiled output.

There’s a time and place for Scastie, when you want to reproduce more involved setups with custom SBT config and esoteric Scala versions. But for this use case, it seems ScalaFiddle is just the right tool for the job.

Cannot agree more, thanks for putting together this detailed explanation!

Show how the user can do things they already know they want to do, easily - I agree

Thank for this detailed review. Your feedback points to directly actionable items.

It appears the fault is split between lack of full optimizations on the JS blob, as well as lack of gzip compression on the server. Apart from initial download speed, ScalaFiddle does a bunch of things Scastie doesn’t, e.g., caching compilation output using a CDN for instant initial page loads that include running the compiled output.

There are a time and place for Scastie when you want to reproduce more involved setups with custom SBT config and esoteric Scala versions. But for this use case, it seems ScalaFiddle is just the right tool for the job.

I agree with this. Notice in the embedding above, there is no settings or anything like this. There is a run button and a button to go to Scastie. The cool thing with Scastie, it’s its extensibility. A new user might want to try a library for parsing JSON for example. We make this super easy.

Yes, I know, but even if Scalafiddle supports only Scala.Js it is much master and has got some better bindings for rendering output (i.e. things like: http://www.lihaoyi.com/hands-on-scala-js/ ).

We have a really cool DOM binding: 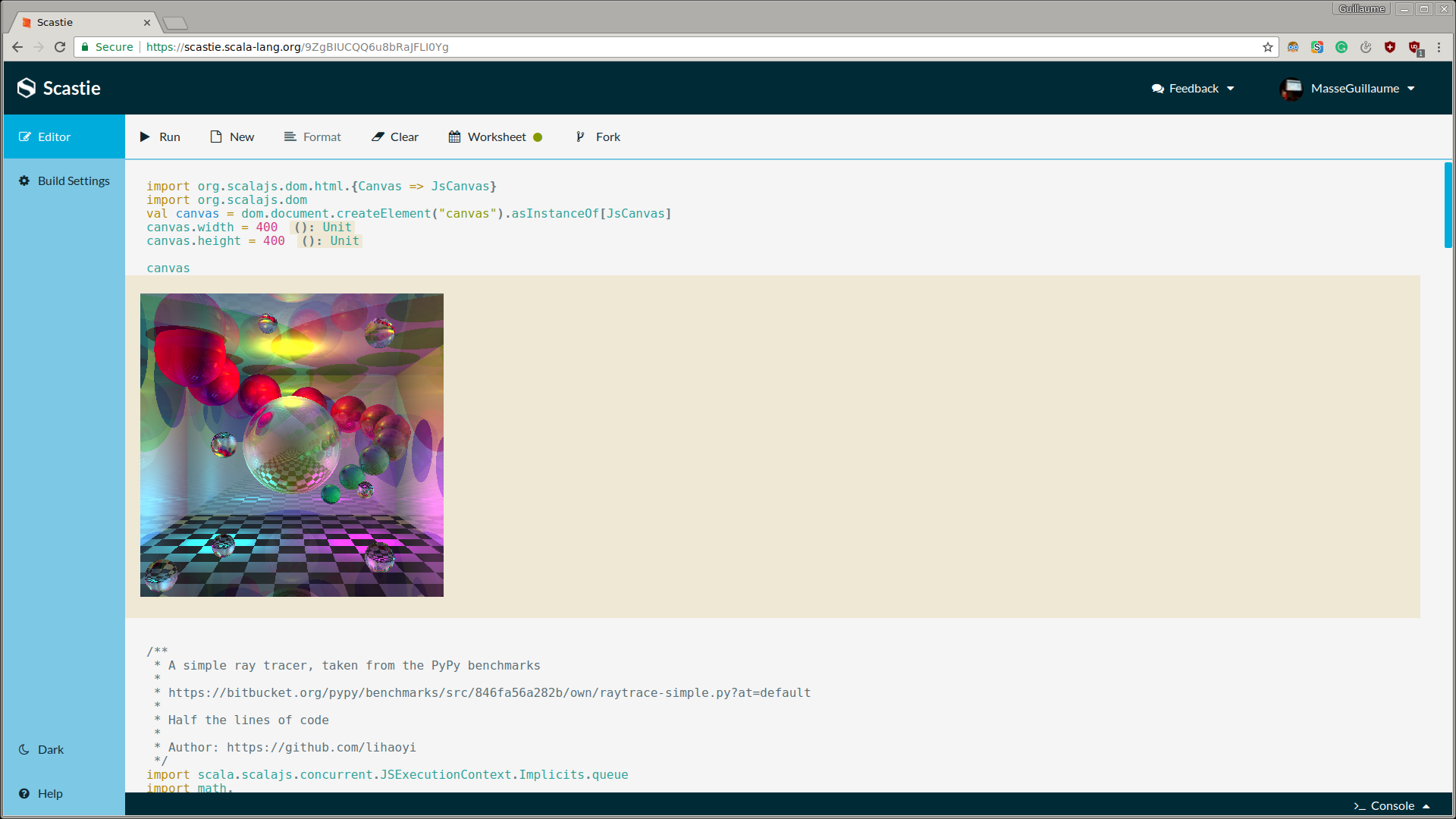 They need to use akka.js because scalafiddle does not allow you to run JVM code by design. I don’t want to underevaluate the work that was done in akka.js, but it’s not akka. The execution model on the jvm versus the js vm is completly different.

More generally, I see This is a limitation. You should be able to use any target (JS, JVM, etc) you want.

I was simply expecting to have a poll on community before going straight with one solution.

Scastie can be a little bit slower than scalafiddle since we need to reload configuration or wait for execution on the JVM. However, it is a more general solution. It allows all possibilities of libraries and targets where scalafiddle is limited to a predefined set of libraries and Scala.js. Using sbt directly allows us to quickly enable new platforms (Scala-Native, Dotty, Typelevel Scala, etc) and evolve quickly when new Scala version are available. Lastly, It is a project supported by the Scala Center and we are committed to ensure the continuity of the projects for years to come.

It shoud be clear what the exact goal of putting a snippet of Scala on the front page is. My guess is conversion rate. The snippet should get as many visitors as possible to play around / read more about Scala, right? It doesn’t matter if we show off crazy features when the page visitor does not stay and invest more time. So in my opinion the only way to find out is measuring the conversion rate of different snippets being shown. The one with the best rate wins.

@MasseGuillaume I totally understand that there are pros and cons in both choices.
I personally think that this argumentation has fond but is biased, and I can see that there are different positions here in the community,

I will love to have the Scala site that clearly reflect the Scala community and I think that a poll on this decision will simply and effectively stop discussions and give us a strong feedback.

I’m not arguing that we will have a clear winner and I will be extremely happy if all of your arguments are felt by the the major part of the rest of the community.

B.T.W. if you and Scala Center have already taken a decision I’m wondering why it’s worth to ask people about the content, you are totally free to go your way even on this topic!